Welcome. Use the Labs website or head over to the Tech for Good Hub for newer content. 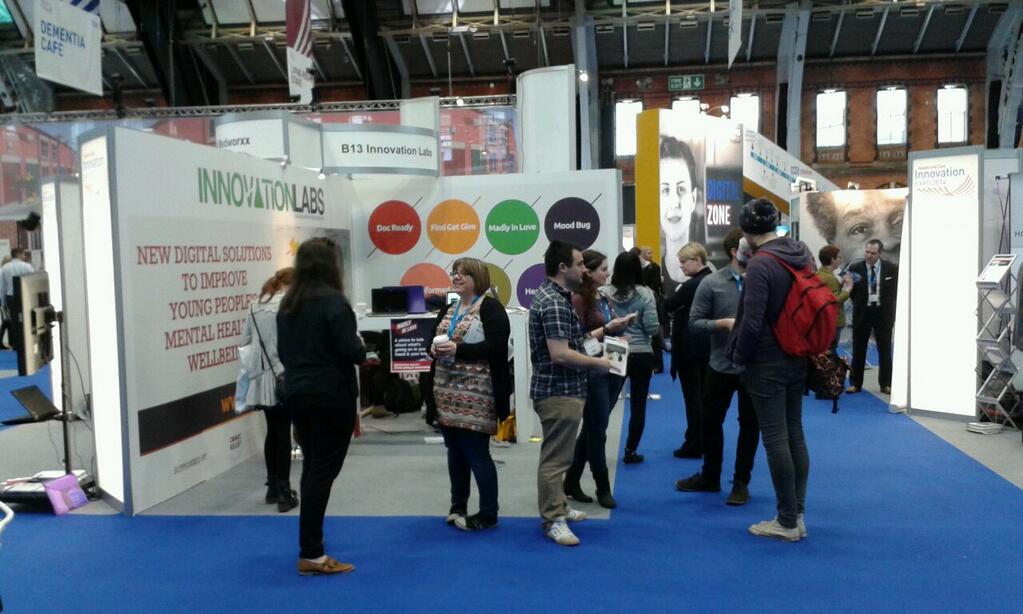 This week I went to the Healthcare Innovation Expo in Manchester, the first time that the event has gone up North from London. In my capacity as a young person sitting on the Labs project board I was invited to the convention in a very (forgive me here) unconventional capacity.

So many people were interested in the Innovation Labs concept when coming to our stall. The idea of co-creation with young people, as well as technologies to promote not only mental health recovery but also general well-being seemed to go down really well with almost every visitor.

One of the true high points on day one of the Expo was a gentleman from an organisation called CLIC Sargent, who said that whilst working with children and young people suffering from cancer these technologies Innovation Labs have been supporting would be useful. Not only was the gentleman super polite and seemed genuinely interested, but confirmed this in the evening when he brought three colleagues over with an excited look on his face saying he’d told them what he remembered but really wanted them to have questions answered – I shall take that as a definite win for Innovation Labs and co-creation.

The second day was even more positive at the conference, several more of the funded projects were there as well as a steady and healthy flow of traffic to our stand. Some of my favourite bits have to be the people who came specifically looking for us, the phrase that pays being ‘I was told to come to see you guys by x, y or z.’ This felt so good – not only was the project looking good to people, but our explanation was getting people excited and interested (or it was so bad that it was worth a laugh, in which case stand-up here I come!)

It was another day where people came from across various disciplines, but still showed the same interest about the products that the Innovation Labs project created. We had a teacher at a sixth form college come and tell us she had been referred, that she had been looking for something that would work for her school’s mental health awareness week in May, letting us know that the ideas were going to be really appealing to students.

Even better though, was when the Assistant Director from one NHS trust asked what Innovation Labs was. Hardly anything new there, but her response to my spiel was  brilliant. I told her how the key message of Innovation Labs was co-creation, coming up with and developing applications and resources that young people would not only like to see, but actually use. At this point she interrupted and said that she had an agenda of her own, she was interested in what we had done, but primarily wished to find out how the development had been approached, and out of all the stalls she had visited it was only Innovation Labs that had consulted with the intended audience. One of her biggest fears was that in her Trust’s area the junior doctors developing applications for use were neglecting to consult their target groups!

Now I’m not saying that there is something wrong with not asking the potential users of applications for their ideas, but this Assistant Director was very keen to point out it was probably an awful idea not to have a consultation period during the design phase – who am I to argue!

Of course it’s awful not to include the target demographic in the development of a product! This is one of the key things that I really like about the Innovation Labs process, it has been driven by young people, who are often a group not included in or trusted to make the decisions that influence the entire product.

The whole Expo conference was seemingly a success for the Labs (I never doubted it). People were not only excited by what had been made  but also the idea and philosophy that is behind the creation of Innovation Labs.

Daniel has been involved with Innovation Labs from the first Lab day, becoming a Young Person on the project board. He currently blogs about his own mental health experiences at Ctrl+Alt+Mad.

You’re invited to join Comic Relief & Paul Hamlyn Foundation’s Tech for Good Hub for free. Sign up for content that gets you ready for funding.

You’re invited to join Comic Relief & Paul Hamlyn Foundation’s Tech for Good Hub for free. Sign up for content that gets you ready for funding.